Summer is here and life in the Morris house is in full swing, much like it is in your houses.  A few weeks ago I posted blogs about being a house guest, and being  a host, since this time of the year finds us as both.  Right now, our house is bustling with guests and it is pretty common for me to be preparing meals every night for 10 or more people.

Some very special guests we host in our home are the friends of our children.  Especially in the summer months, we have multiple little guests camping out in the bedrooms, family room, or in a tent in the backyard.  Nights are filled with laughing, jokes, boy noises, and girl squeals.  Bedtimes are pretty elastic and sleeping in is strongly encouraged! Once in a while, as the night wears on, the kids begin to tell each other stories.  I don’t know why it is always in the evenings that kids’ minds gravitate towards scary things they have seen or heard about, but somehow, being in the company of others prompts them to share their scariest thoughts.  Ughhh!!!

As a parent, or host to little relatives, you have likely experienced this phenomenon.  Maybe it was the ghost stories around the campfire at scout camps, or just the commercial that popped up on the TV during a favorite show that triggers an unsettling night for your kids.  Whatever it is, it is sure to interrupt your world as well, and cause your kids to be afraid.

Since our children were very young, I have introduced a few things into their world when they are scared at night.  First, we pray.  We talk to God about our thoughts and ask Him to fill our mind with good things.  We thank Him that He isn’t sleeping, but is always awake, and always watching over us so that we can sleep peacefully.  We thank Him for His angels that camp around around us, and all the good things He has done for us.  Often, this time of prayer is all that is needed to calm little minds and hearts.  I also teach my kids scripture to say to themselves or out loud when they are afraid.  My prayer is that they will carry that with them for the rest of their lives.

Over the years, and adapting with each of my children, “Fuzzy Bunny Circus Island” has become a place where there are always guest appearances from some of their favorite people, animals, or entertainers.  There are baboons that tell jokes, turtles that give tours around the island when you ride on their backs, and bumper car rides with lady bugs.  The idea is to create a picture and have my kids run with their imaginations and tell me what they see on the island.  After a few minutes, my kids are lost in their imaginations watching skunks having Nerf gun fights in a pool filled with jelly beans, or riding a Ferris wheel with a fuzzy raccoon.  Once the boat sets sail, the imagination is endless.

Last night we visited this island again with my youngest daughter and her two friends.  It was late, they were over-tired, and their imaginations had drifted to things that scared them.  My daughter came to my room and asked me to come in and pray with all of them.  I did.  Then I introduced my daughter’s friends to our imagination place.  I described the island to them, told them the kinds of things they would find there,  and then I asked them to tell each other what they saw.  I returned to bed, and the girls continued talking for a few more minutes.  I heard giggles and squeals as they told each other the fun and funny things that they were imagining on the island, and I knew they had shifted their thoughts.  Ahhhhh!!!!  Sleep found them eventually, and all was peaceful.

Scripture speaks to us at every age, and although “Fuzzy Bunny Circus Island” is not a real or scriptural place, the principle of teaching my kids to put their mind on good things is important to me.  What they put into their minds, or watch with their eyes is a big part of my responsibilities as a parent .  We guard them as much as we can, and pray for them even more than that, knowing we can’t protect them from everything.

My older kids have graduated to some degree from the “Island”, but I hear them from time to time, telling the stories to their younger siblings, and recounting the things they used to imagine when they were smaller.  Maybe they will tell the stories to their own kids some day. 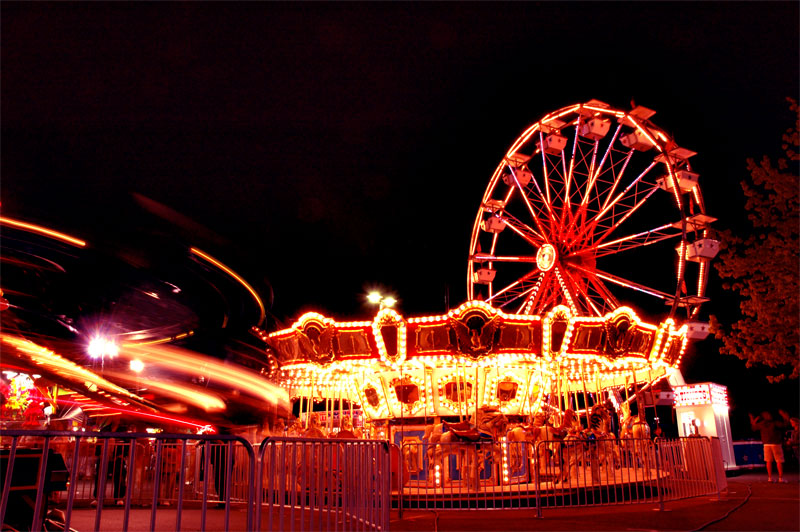